Limited time offer! Free CD Baby Distribution with any CD order ($39 value!). Get started.
Get free ground shipping on any custom disc order of 100 units or more! Use code FREESHIP4U at checkout. HURRY - Ends 10/30/20! Get started.
Disc Makers Community About Press Independent Musicians Band Together to Raise $100,000 for the Victims of Hurricane Katrina with Special Gulf Coast Healing CD

Independent Musicians Band Together to Raise $100,000 for the Victims of Hurricane Katrina with Special Gulf Coast Healing CD

September 21, 2005, (Pennsauken, NJ) — Disc Makers, the country's leading independent media manufacturer, is proud to announce a unique collaboration of artists and industry-leading companies to help raise money for the victims of Hurricane Katrina. Disc Makers has joined forces with Sonicbids, CDBaby, Taxi, and Just Plain Folks to produce a compilation CD entitled Gulf Coast Healing with a goal of raising $100,000 for the American Red Cross. The CD, sold on CDBaby (www.cdbaby.com/gulfcoast) and marketed through all five companies, will include tracks from independent artists from around the country, representing a wide range of music from rock and hip-hop to world beat and reggae. All manufacturing and mastering services, talent, recordings, materials, and promotional services were donated in their entirety by the participating artists and companies. 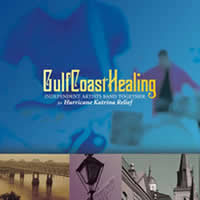 "By teaming up talented artists from around the country with the leading music organizations dedicated to providing artist services, we are able to help those whose lives were devastated by this disaster while at the same time bringing joy and hope through great independent music," says Tony van Veen, Executive Vice President of Sales & Marketing for Disc Makers. "Together we can do much more than we would have been able to do individually." Sonicbids' Founder and CEO Panos Panay adds: "This effort shows the generous spirit of the independent musician, and the many passionate people that make up this industry."

"Thousands of artists wanted to participate, and the 19 artists on Gulf Coast Healing represent them all, and the independent music community as a whole," comments Michael Laskow, CEO of Taxi.

The CD includes 19 tracks, including a track by reggae legend Burning Spear, and one from indie favorites Deadman who contributed their track New Orleans, a tribute they recorded after the disaster struck. The Gulf Coast Healing CD is current on sale and available online only at www.CDBaby.com/gulfcoast. 100% of the price of each CD sold will go towards the disaster relief.

"We are proud to be a part of this great project," says Derek Sivers, founder of CDBaby. "We fully expect the independent community to jump behind this effort and bring much needed help to the residents of the Gulf Coast."

"Whether you're an artist or a fan of great music, I encourage you to buy this CD. The songs are great, and the cause is important," states Just Plain Folks founder Brian Austin Whitney.